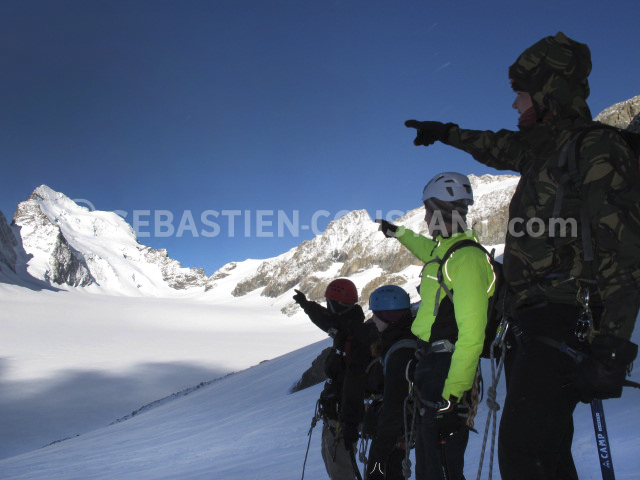 Edward Whymper did the first ascent of Barre des Ecrins (Alps of the Dauphiné) in 1864.

Edward Whymper, but also WAB Cooldidge shared their experiences of exploration in the Ecrins: they wrote descriptions of their ascents and journeys. I was honored to follow their tracks when I decided to publish the first volume of Snow and Mixed Climbs in English (2010). For a french climber, mountain guide and geographer by training, that was a great challenge. Patience and experience helped me so much to manage with this unprobable project.

With the King’s College London Mountaineering Club, we’ve been scrambling in the Glacier Blanc Basin; This was an uncommon dedication of the 150th years anniversary of the first ascent of Barre des Ecrins.

Barre des Ecrins is the main summit of the Ecrins Range. Great panorama of Dome and Barre des Ecrins from the normal route of Pic du Glacier d’Arsine (famous and easy peak of Glacier Blanc Basin).

Normal route of Pic du Glacier Blanc (Alps of Dauphiné – Ecrins Range), with KCLMC. A perfect summit to get involved to alpine mountaineering.

so in 1864, Adolphus Warburton Moore and Edward Whymper and, figures of the golden age of Alpinism, planned together to do an attempt on “Pointe des Ecrins” (now called Barre des Ecrins). Whymper could use the precious information from Francis Fox Tuckett (has provided in 1862 the famous map of Centrak Alps of Dauphiné). He also engaged Michel Croz as a guide, who already did an attempt in the summer 1861. The ascent was an epic adventure, and all the team finally decided to follow the East ridge to explore a descent solution.